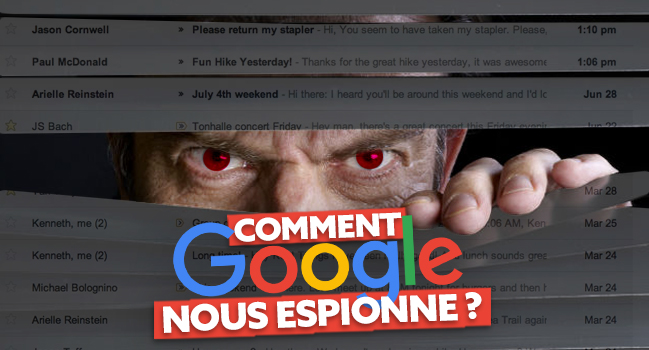 GMail tracks all your online purchases on behalf of Google

Recently, a discovery was made that the American giant Google, would collect information about the various online purchases made by users of its E-mail service GMail.

Apparently, the U.S. company would collect all purchases made by these users on a single page using purchase receipts that were stored in GMail.

This article will also interest you: 4 steps to secure his GMail account from hacking

A page of history was recently brought to the public's attention in an article published by CNBC. Even though this page has been around for at least 1 year, after an update to the functionality of The Google assistant, it is really in recent times that the general public has really become aware of its existence. On this page, it is possible to find purchases that were made by GMail users, subscriptions where any type of financial transaction made through the email service or not, but as soon as the purchase receipt was received on the account.

In short, the U.S. company knows exactly all of the purchases made from the GMail address. Purchasing information is made up on a page called "Payments and Subscriptions" in the Google account.

It should also be noted that the data collected is not limited to purchases alone. These include bookings for hotels, flights, restaurants, google's assistant or even GMail. However, this shopping page gives this clarification: "Only you can see your purchases. which are made up of "Your transactions, including deliveries and online orders, collected from Google services such as your Wizard and GMail." ».

It is possible to rely on an article, to obtain certain details of the transaction. Details that can tend towards the time of purchase, amount spent, currency used and the amount of money used. delivery period. That there is also an option to "Delete purchase. ». In principle, it would therefore be possible to remove certain Transactions. The function would be particularly useful for people not wanting to be traced by Google, but for those who would like to keep track of their transaction, it will be of no use. However, Google says this: "The information about your orders can also be registered with your business in other services It's Google. ».

Asked about this compilation of data, the American giant tried to reassure by saying that this database was not used for advertising purposes. On CNET, Google assures not to use this information to target ads. That this is a response to the company's decision not to analyze emails to target advertising strategies since 2017. However, the U.S. company doesn't really stop collecting data for other purposes, such as creating "recall" features. "We don't use the information in your GMail messages to send you ads, including receipts and confirmations on the Buy page," the Google spokesperson said.»

Other sources other than GMail allow the U.S. company to collect purchase data, such as Google Play Store, Google assistant or Google Express.

This is not the kind according to Google that is supposed to help users for its services "to easily visualize and track your purchases, reservations and subscriptions in one place. »