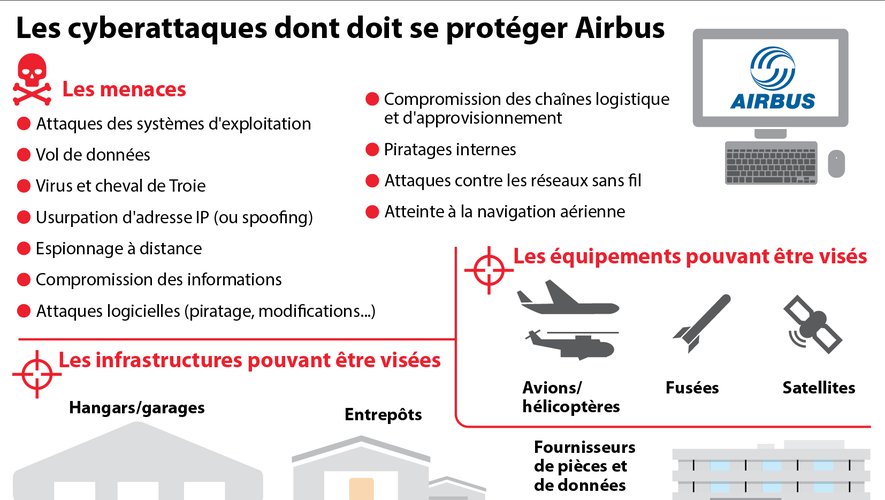 The last few months have been some of the toughest for aviation manufacturer Airbus.

Indeed, the firm has been a victim of computer hacking several times. The hackers attacked the manufacturer through subcontractors, according to AFP. Several of its sources suspect China of being the mastermind of these attacks.

This article may also be of interest to you: Heavy penalty for British Airways following the hack

We see behind these repeated attacks of industrial espionage. In a case concerning the most recent attacks, which amounted to more than a dozen formed by the news agency, it was found that the French companies consulting the technologies Expleo, the British company Rolls-Royce, and 2 other subcontractors of French nationality not determined by the French News Agency.

It should also not be overlooked that attacks on Airbus, considered by the cybersecurity firm Anssi, as a "Vitally Important Operator" are really recurrent. But only in the last 12 months has it been a little too cumulative. We're talking four major attacks in all.

The attack on Expleo was discovered at the end of 2018. But traces of the malware used goes back a long time. "Very sophisticated, it targeted the VPN that connected the company to Airbus though." according to an AFP source. The aim was to corrupt the VPN used by aviation giants. Going through its subcontractors, the hackers were aimed at gaining access to Airbus by posing as the latter. Earlier this year, Airbus announced a massive data theft of its employees from its commercial aviation division. According to the AFP sources, the attack began first in the Assystem's UK subsidiary, then Rolls-Royce at the French to de Assystem. "Very large companies (such as Airbus), are very well protected, it's very hard to hack them, while more small businesses are going to be a better target," explained the security of BoostAerospace, a digital grouping in the aviation industry, Romain Bottan.

The current problem at Airbus and how to protect its subcontractors because it is a fairly missioned complex. "The doors are closed so they go through the windows, and when the windows will be they will pass through the chimney," said Loïc Guézo, the director of cybersecurity strategy at Proofpoint, a California-based company cybersecurity specialist. The question everyone is asking today is knowing that exactly is looking for these hackers. Several sources claim that the attacks have mainly technical documents related to certifications where procedures have been conducted to ensure security requirements.

According to three sources interviewed by the French News Agency, the documents that were stolen relate to plans for the engine system of the A400M aircraft, which has turboprops considered one of the most powerful in the world. They would also be interested in the widebody engine other than the A350. In the meantime, an investigation is still under way.