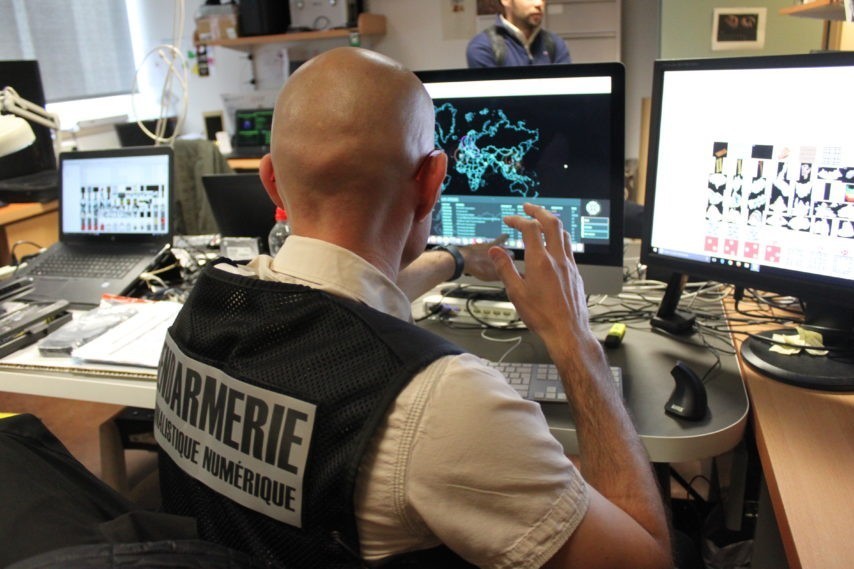 Eure-et-Loir gendarmes on the lookout for cyber-malleneence

According to the Eure-et-Loir authorities, criminal delinquency on digital platforms has developed significantly since containment began.

A clear and clear problem that is observed all over the world. "This week, a security flaw detected in the computer network of an Eurélian company was immediately reported by the Gendarmerie Security Referee and arrangements were made by the company to secure the system," the commander of the Eure-et-Loir gendarmerie group, Colonel Georges Pierrini, said on Friday (April 17th).

This article will also interest you: Digital Tracing and Covid-19: the risk of cyber-malveillance to be taken into account

It should be noted that this event is not an isolated case in the region especially. This is precisely what makes local authorities a priority for cyber threats. They have set up a team whose aim is to fight against various traps, decoys, computer attacks and other acts of cyber malice. This team includes Colonel Georges Pierrini and Warrant Officer Nicolas Muzellec, a Cyber patrolman, already recognized among companies and a few companies to which he often provides security advice. Colonel Pierrini tries to justify this interest in cybersecurity by stating: "Cybercriminals take advantage of the intensive use of the population's digital media, confined and telework, to capture valuable and confidential, personal, professional and banking data, and use it for fraudulent purposes."

The gendarmes of the cybercrime division of the locality of Eure-et-Loir (SOLC) have sophisticated technical means to properly fulfil their role. To properly complete their tasks they often carry out cyber patrols to ensure that websites are not malicious to local users. For his part, the Colonel notes: "The security reference, in constant contact with company managers, informs them and advises them on good practices to optimize their safety system and preserve their production. ». The goal is to ensure that some of the most common cyber threats are avoided these days. We will talk about ransomware, Phishing or industrial espionage.

For this reason certain precautions are necessary. Hackers are often helped by users who don't pay enough attention. Scammers spray on the web. Whether on discussion forums, social networks or even traditional electronic correspondence methods such as email, everything then transforms as a field of cyber-malveillance activity. This is why users are advised to pay attention to their different matches. Do not click on any link inviting them to take any action. Moreover, it is recommended to make sure to be totally up to date at the level of the software used, to avoid using reliable transmission networks for the various exchanges, to make regular backups of important information, to be very careful when downloading so as not to get infected with malware, especially to beware of strangers who sends you emails. This advice is valid during financial transactions for users, who must issue the minimum amount of information about them and be careful on different platforms.

If its recommendations are warmed up, it is never worth remembering that cybercrime is gaining ground more and more. According to analyst differences, there are more than 250 million malware-related activities per day. Cyber-malware even dares to use logos or visual identities belonging to official institutions or even to recognized companies. This unfortunately encourages phishing actions allowing hackers to collect personal information and reuse it against their victim. "Confidently, web "preys" are redirected to links to continue manipulating them on illegal sites with false confirmations sometimes sent by text message. The colonel noted. He also wanted to mention the fact that "the Gendarmes Of Europeans are also investigating the crime supermarket on Darkweb. An encrypted universe in which transactions relate to the trafficking of narcotics, weapons, medicines, forged documents, forgeries, numbers or copies of bank cards, or on the topic of ideological propaganda, paedophilia or to acquire mafia-like services. ». For example, in France, 18% of the emails received will be involved in complaints about cyber malice. And generally there are impersonations of visual identities including that of Outlook, Microsoft or Amazon. 59% of complaints relate to fake websites usually Netflix, Apple or eBay. 23% of complaints are mobile. To this end, the gendarmes always recommend checking the domain names of the websites you visit. It is not uncommon to see faults in their syntaxes when you are on fake sites.

CategoryCyber-security
Article Précédent : Why does telework attract cybercriminals so much?
Article Suivant : Is telework safe, is it possible?