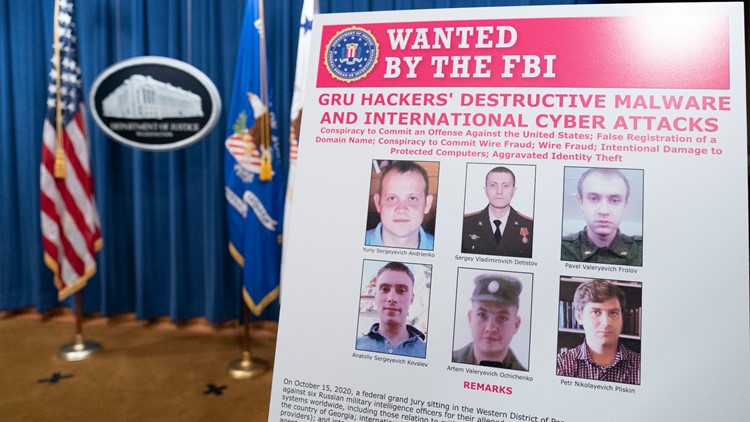 From 2015 to 2018, the IT industry was rocked by several major computer attacks.

– The giant outage that affected the electricity grid in western Ukraine;

– Attacks based on the NotPetya ransomware that shook the world

– Attacks on the Pyeongchang Winter Olympics.

All these events a common denominator that today has been brought to light: agents of the Russian intelligence services. They are now indicted by the U.S. courts.

This article will also interest you: 2 Russian pirates struggling with American justice

Recently the U.S. Department of Justice published names, with the FBI going down to publish photographs of the people behind these cyberattacks.

The four officers charged with developing the NotPetya malware, which was used to attack the Pyeongchang Winter Olympics, as well as a phishing campaign against South Korea's Olympic games partners are:

On the other hand, Agent Pavel Valeryevich Frolov, in addition to having participated in the development of the NotPetya malware, he is also charged with having been behind "KillDisk", the malware used to divert The electricity grid of Ukraine.

As for Anatoliy Sergeyevich Kovalev, he is considered the time the culprit of the case is directed against Macron's party, En Marche, but also for the spread of the wiper NotPetya, against the Winter Olympics in Pyeongchang in 2018. That's not all, he is also believed to be responsible for the massive cyberattack that has hit several georgia websites.

According to information from the US authorities, season will be part of the "74 455" unit of the Russian military intelligence services. Several COMPUTER specialists refer to this team as "Sandworm. ».

On this case, the U.S. authorities did not fail to give their views on the whole. For them, there is no doubt about their affiliation with Russia. "No country has armed its cyber capabilities as maliciously or irresponsibly as Russia, causing unprecedented damage to pursue small tactical advantages and to satisfy vets of spite. Today, the ministry accuses these Russian officers of carrying out the most disruptive and destructive series of computer attacks ever attributed to a single group, including launching the NotPetya malware. No nation will regain its greatness by behaving in this way. ».

In 2018, in a briefing note from its Foreign Office, the UK accused Russia for the first time in Europe of being behind the NotPetya malware attacks.

"The UK government believes that the Russian government, specifically the Russian military, was responsible for the destructive cyberattack on wiper NotPetya in June 2017," Lord Ahmad, a member of the House of Lords, said at the time. The latter did not fail to raise Russia's attitude in the face of the clear non-respect for Ukraine's sovereignty, as well as the financial impact that all its actions have had on the whole of Europe. "Russia is directly positioned as an adversary of Europe when this should not be the case. We call on Russia to be the responsible member of the international community it claims to be instead of undermining its actions," the Lord stressed.

It should be noted that according to a publication of the American media, the Washington Post. "The GRU created the NotPetya concluded the CIA in November, according to classified reports cited by members of the U.S. Secret Service." He added: "Ukraine has been the prime target of attacks by the GRU (General Directorate of Intelligence of the Armed Forces of the Russian Federation) in connection with the annexation of Crimea."

On the French side, the website WikiLeaks published several data related to the En Marche party, which was already available on the Internet, on the eve of a second round of the presidential elections. Are these documents available following a massive hack by the team of the future French president at the time, Emmanuel Macron. The data leak has been dubbed the MacronLeaks. The published documents were confidential in nature. Again, Russia had been singled out from the beginning. However, the director of the National Information Systems Security Agency wanted to remain skeptical on the issue meaning that nothing could confirm or disprove this state. "Anyone could be behind this attack because of its simplicity," he said.