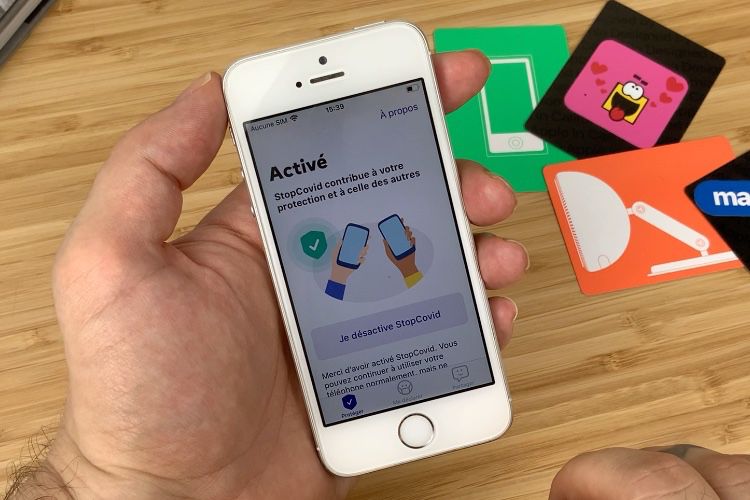 StopCoviD: the problem of iPhones

In a few days the Mobile Tracing application of the French government will be officially deployed.

StopCoviD is supposed to help a pretty laudable deconfinement plan. On Wednesday, May 27, the National Assembly, like several French state authorities, finally gave its consent to allow the public availability of mobile tracking software. The tool is supposed to help control the spread of the virus. And for that to happen, StopCoviD will trace the contamination. By collecting information related to the different interactions between individuals. But first, it should be noted that the application does not geolocate its user. Everything works with Bluetooth. This has the merit of increasing the confidentiality of the information. When two individuals within a perimeter of about 1 meter, their applications will mark the interaction. If one of these individuals is subsequently tested positive for covid-19, a notification is sent to the other, informing him of his contact, prompting the latter to not only isolate himself but also to be tested in turn. The identifications are anonymized, and everything works on the basis of pseudonym. Perhaps one of the problems with the application would be the fact that it is typically based on volunteerism. Information about a person's status can only be shared with their consent, even though the information is anonymized. Indeed, as stated by the President of the National Commission for Information Technology and Freedoms, Marie-Laure Denis, the application will have to require the consent of users in advance on various points: "What data is used, by whom, with whom they are shared, for what purpose, for how long. It is important to ensure that there is no pre-checked box. ».

However, another problem remains. This would be the use of the app on iPhones. When these smartphones running on iOS are on standby, it doesn't put a bluetooth signal. This prevents cross-breeding with other smartphones in the same area. According to the secretary in charge, Cédric O, the crossing should work in the majority of cases, but he acknowledges that it will not work 100%. The most common failures will be linked to the iPhones because of a particular setting. Indeed, the manufacturer of iPhones, Apple, has set up its device so that the bluetooth is automatically blocked when the tool it has activated no longer works. For example, when putting the phone to sleep, for example. Following tests, it was confirmed several times that the mobile tracking application no longer emits a signal a few minutes after the iPhone is locked. That's why the digital secretary said, "It doesn't work 100% of the time. Indeed, if two iPhones on standby intersect, the application does not work, but this is not a very common situation. ». But this limit is not insignificant. According to a study conducted by Fellow Kantar, French smartphone users are made up of 21% iPhone owners, 19% of which are owners of devices running Android. The team in charge of designing the application reportedly claimed to find a way around the problem of iPhone sleep and turning off the bluetooth signal. "If an Android crosses an iPhone, it wakes it up," explains the experts in charge of the project. But the effectiveness of all this will depend on the smartphone model of the operating system version. "Maybe on some very old phones, maybe on some particular versions of iOS or Android that are not widely distributed among the French population, there is a lot to improve," Cédric O said at a hearing in the National Assembly on Tuesday. The Secretary of State states that according to the tests carried out: "We capture between 75 and 80 per cent of the people nearby, or less than a metre away."

In addition, the French government had asked the American firm to remove the protective barrier on the bluetooth to facilitate the operation of the tracing application. Unfortunately, true to itself, Apple simply refuted the request. The pretext remains the same. The security and privacy of iPhone users.

CategoryIphone
Article Précédent : StopCovid: 4 points against it that may negatively impact its use
Article Suivant : Cyber gendarmes are now deployed in Deux-Sèvres