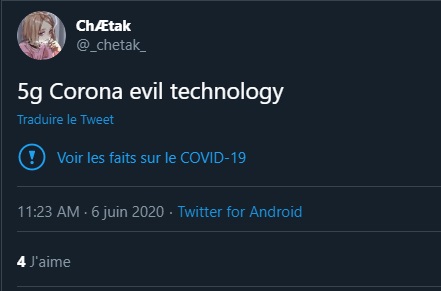 The social network Twitter has decided in its own way to fight against fake news and to bring even more information on the most discussed topics of the moment.

The altitude of the social network corresponds to a need to be able to best stem the scourge of the advance of fake news, especially gravitating around the terms that are most highlighted in recent times. If it becomes almost possible to eliminate false or sometimes erroneous information, hate messages, still the conspiracy theories that most often cause disorder on the social network and everywhere else, the solution might be to publish even more official information to counter them. Thus, the new system adopted by the social network with the blue bird, will be to accompany each tweet talking about coronavirus or the deployment of 5G official declaration, publication for from safe source or interviews of the main actors concerned with the themes. However it would seem that it will not be deployed accordingly, more sophisticated algorithms. Apparently the system will be based primarily on the classic keyword filterings "Covid-19," "coronavirus," "corona," "5G," just below your banner, you'll see the message: "Know the facts about COVID-19." By clicking on this message, information that has been selected by the social network will be made available to you, from several reliable sources such as scientific publications or official statements, press releases and interviews.

This method will be applied to virtually all tweets according to the head of the social network, even legitimate tweets from official institutions. A method that was considered to be a little too radical. Because none will escape this verification system. The media will then be able to walk on their feet. It doesn't matter what the status of the organ is. This is not likely to satisfy him because it will be easy to assimilate or affiliate them to a disinformation campaign. To reassure them, the social network said it was doing everything it could to improve its system through upgrading algorithms. This means that over time, it will be possible to distinguish tweets from news organizations from standard publications made by ordinary subscribers. An improvement that will allow more precise filtering of tweets of a conspiracy nature. This is twitter's ultimate goal."Labelling or posting a warning on tweets remains an iterative process. Given the worldwide spread of misinformation and disputed allegations around 5G and COVID-19, we have prioritized the labelling of tweets with this information. Our team is currently reviewing other types of content and will soon be labeling more tweets," the social network said.

It should also be noted that the efforts of social networks to control posts on different platforms are becoming more and more popular. Unlike Twitter, which plans to bring more information about Tweets, YouTube and Facebook, on the other hand, want to limit the spread of false, misleading or hate-inciting information, by preventing certain posts, masking or deleting them. And this, even at the highest level of the political hierarchy. At the risk of confronting the enmity of some politicians, such as the tussle between Twitter and US President Donald Trump in recent times who protested: "They have the uncontrolled power to censor, edit, conceal or modify any form of communication between individuals and large public audiences. There is no precedent in American history for such a small number of societies to control such a large sphere of human interaction."