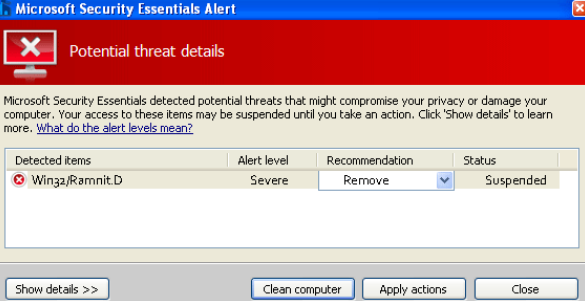 Could this be the return of the super Ramnit virus?

It was at the beginning of this decade that the so-called "Ramnit" malware appeared.

The record of his passage on computer systems was simply enormous. Millions of computer terminals have been infected with this virus and it seems that today we are seeing what can be considered symptoms of its reappearance.

This article will also interest you: A Super Virus Against Apple Devices

According to a study by security researchers thousands of computers are infected with a virus with the same characteristics as the latter. 70% of terminals infected with this viruses have been located in Europe. Especially in Italy's financial sector. And 90 per cent of cybersecurity are sure to be facing the same virus.

It should simply be noted that Ramnit and a Trojan horse type, with a source code that is based on a Zeus program. Created in 2010, its malware's goal was to infect millions of work. At its core, this IT service may be intended for banking institutions. however it has managed to sneak in and spread to other areas. E-commerce, the industry through social networks, this virus has affected virtually every area. However, the sector where he has most distinguished himself is that of the cryptominage and ransomware-type attacks.

Currently, researchers specify that it is in the shape of a Trojan horse and its mischief have been going on for some time.

Currently the damage that has been estimated is 800,000 infected computers. it is estimated that the virus is also responsible for hacking 45,000 Facebook accounts.

After an analysis conducted by the researchers of F5 Labs and F5 Security Operations during March and March February of this year, the malware's configurations showed that the malware had aimed at tackling financial systems, including that of Italy in particular. it was discovered that the target computer virus Italian banks. In addition to financial institutions Italian malware has also taken an interest in some of the BRITISH computer technology located in Great Britain, France.

The use of this program is very sophisticated. Pirates computer computers proceeded by injecting malicious code. In this way, thanks to their virus they can collect clandestine information on users, some very important data such as information personal data or identification data. It was noticed that on the code computer virus, some words had been written in English, in French, and in Italian. according to the report by cybersecurity experts regarding the analysis of the virus code, it was stated that this presented itself innovation that would not have been developed in the old days. malware configurations. It is as if the aim is to expand its scope and reach several sites Internet at once.

contrary to the old appearance which aimed that European institutions. The news, it extends out of the Continent to reach the United States. the 30 percent of victims of the new configuration are American while France and Great Britain have only 10%.

however experts reassure us that it is not very difficult to get rid of this malware. no special kit is required or any special procedure. however, it is advisable to entrust infected machines to professionals to prevent them from being damaged.