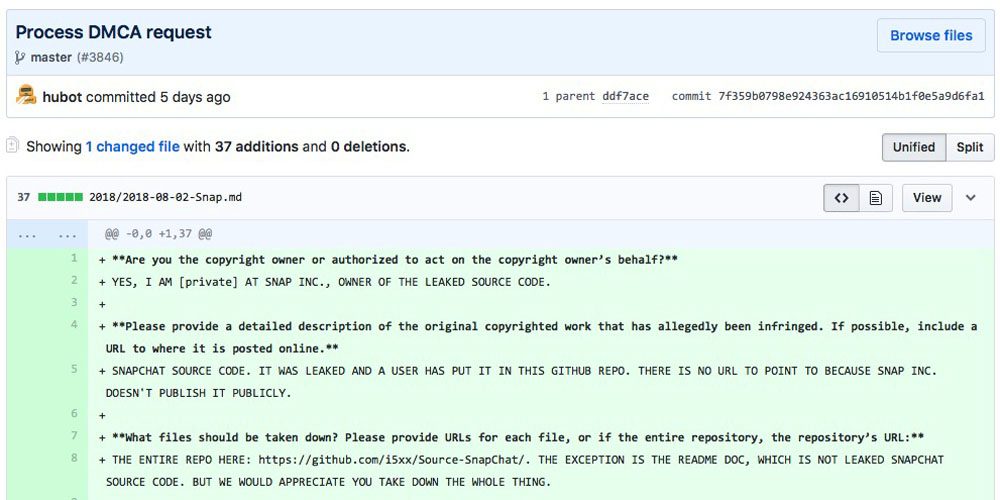 Last May, snapchat unfortunately missed the mark, allowing a hacker to attack the app to update the iOS version of its app.

The immediate consequences were the publication of the partial source code of the entertainment application on GITHub. It is not clear who is the culprit in this case, however, according to what has been revealed, he is a hacker of Pakistani origin.

This article will also interest you: Oltean Vlad victim of a hack on his Snapchat account

the bridle of code that was leaked on the platform would seem to be intended iOS system, which had been removed by the company that owns the Microsoft, following the receipt of a withdrawal notice issued by a representative of the social network. And according to the rules in this area, you can't request data restoration when you're erased on the platform only if following a counterclaim from the publishers of the data in platform leaders agree to respond to the request. he it is possible to see it when accessing GITHub, the request for withdrawal is always and mentioned as am at the bottom of their tab "Unavailable repository" DMCA withdrawal."

the content involved here in this hacking case was titled " Source-Snapchat." It was posted by a user whose identification "i5xx." This user claimed that he had found the code elsewhere so he only copied it on GITHub.

that which is sure is that in general, we think that the latter has only posted this bridle of code, that he did not even know the source of the leak.

he would be just a curious one who was lucky enough to stumble upon some something so precious. In addition, Snapchat also announced that it had launched its side an investigation for the purpose in order to know more. He considers the hacking the app as being one of the biggest attacks in a copyrighted system that may be in 2019. Especially since rather within a year, iOS components had been hacked and unveiled on Internet.

According to 'a cybersecurity expert, quoted by the media newsWeek, the lines that have been unveiled on GITHub seems to be part of the application itself and not of an older version. Probably these are basic lines of code Snapchat app.

for it's time for the hacker to be everyone's priority. According to the media Newsweek, he would have computer with the identifier "i5aaaald".. We've got it located in a small town in Pakistan precisely in the province of Sindh.

As for the consequences of this data leak nothing has been specified by the social network. Although some believe this is a danger to users no statement from Snapchat has yet been received at this level. It is announced that there is no danger of threatening all of these 500 million users. No alerts being given on Snapchat's side. The whispers are still heard. Moreover, this leak, although it is embarrassing, does not seem to have any immediate consequences on the operation of the application less is what we have seen for the time being about three months now.

To hack into a Snapchat account, you can download PASS DECODER. This software is designed to help people find their lost or forgotten password. You can find any Snapchat account from an email, phone number or ID.